It is not often that you come across a workplace that has 5 generations of staff supporting the same goal. At Wagga’s RAAF School of Technical Training (RAAFSTT), and as part of the Aviation Technical Training (ATT) contract, 3 BAE Systems Australia and 2 Pennant staff have, in total, supported technical training for over 40 years! What makes this story even more interesting is that each generation had a hand to play in the younger generation’s education and training. 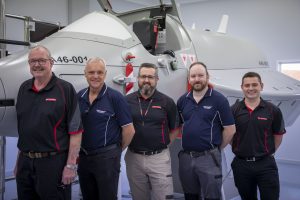 Here is a snapshot of their careers.

Tony “Hutch” – BAE Systems – Hutch joined the RAAF on the 9th of January 1967 and graduated RSTT in 1969. After a posting to Richmond and Pearce, Hutch returned to RAAFSTT as an instructor in 1977. Hutch discharged in the early 80’s after 15 years of service and returned as a civilian instructor in 2000. Hutch still works at RAAF Wagga as a casual teacher in support of RAAFSTT and the ATT contract.

Alf “Alfie” Stein – Pennant – Alfie went through Wagga in 1984 as an Instrument Fitter. After graduating, he was posted to 486SQN and 37SQN in Richmond. In 1990 he was posted to RAAFSTT as an instructor where he first met a young trainee – Phil Hope. During the Flight Line phase of Phil’s training,  Alfie was the taxi operator for the Winjeel aircraft used to train students on marshalling and Flight Line Operations. Alfie discharged after 10 years of service and now works for Pennant at RAAF Wagga in support of the ATT contract.

Phil “Hopey” – BAE Systems – Hopey joined the RAAF on the 15th of Oct 1990 on 6/90 Instrument Fitter course. After graduating, Hopey was posted to Amberley and worked at 501WG, 482SQN and 1SQN. Hopey returned to Wagga as an instructor in 1997 and 2000, after discharging, became a civilian instructor at RAAFSTT. In 2002 he had the pleasure of teaching Heath Conroy the AVI, AVE and AVR subjects.

Heath Conroy – Pennant – Heath joined the Air Force in 2002 as an Avionics Technician on 6/02 AVTECH course. Heath’s 16 years of service saw him posted to 11SQN, 92WG and 1RTU. In 2015 he was posted to RAAFSTT where he had his first interaction with Lee Baker. Heath discharged in 2018 and joined Pennant where he supports the ATT contract in a multi-role capacity including courseware development, teaching and maintenance.

Lee – BAE Systems – Lee joined the Air Force in 2015 as an Avionics Technician on 4/15 RAAF AVTECH course. Upon graduating, he was posted to 1SQN at RAAF Base Amberley. After 4 years of service Lee decided to discharge and has now joined BAE Systems as an Avionics instructor.

The Commanding Officer of RAAFSTT, WGCDR Sheena Stapleton, is extremely proud of the successful joint training partnership between RAAFSTT, BAE Systems and Pennant. She reflects on the pride and dedication to service demonstrated by the five generations of BAE Systems and Pennant instructors, and acknowledges their significant contribution in generating Defence’s newest aviation technical workforce capability.